The amount of data we generate on a daily basis is staggering. Whenever an internet user tweets something, posts a photo, or hits that like button, they produce data. In fact, statistics say that we produce 2.5 exabytes (or 2.5 billion gigabytes) of data every day. Producing data is easy, but processing it is where things get tricky. Traditional computers, though they’re more efficient and smaller than their predecessors, have their limits, as they can’t process complex problems in a reasonable amount of time. For handling such operations, we need a different, more powerful computational approach, and scientists are already racing to develop the next generation of computers – quantum computers.

What is quantum computing?

To process information, traditional computers use binary bits, which exist in two states: 0 or 1. Based on this principle, they can only perform one task at a time. But quantum computers are different. They use quantum bits, also known as qubits, to process data. Unlike binary bits, qubits can act as a 0, a 1, and both simultaneously, which means that a qubit can have more than one state at the same time. Referred to as superposition, this mechanical principle enables quantum computers to perform millions of calculations at once.

Quantum computing is also based on another principle – entanglement. This mechanical phenomena refers to the state in which qubits that are in a superposition are linked to other qubits, which means that the state of one qubit depends on the state of another. When entanglement is combined with superposition, it makes quantum computers capable of processing mind-boggling operations. In other words, all those complex operations that traditional computers fail to process could easily be performed by quantum computers at great speed. As Matthew Brisse, the vice president of research for Data Center and Cloud Infrastructure at Gartner, observes, “With quantum computing, we can do things in massively parallel systems that we couldn’t do before.”

For quantum computers, the bigger the problem, the better. Let’s take Grover’s algorithm as an example. This quantum algorithm is able to find a specific name among 100 million names, while using only 10,000 operations. If the same task was given to a classical computer, it would use 50 million operations. Furthermore, the process, which would take 31 years to be completed on a classical computer, could be done in only nine hours on a quantum computer. Here’s how. Imagine you need to find a specific phone number in an unorganised list comprised of hundreds of phone numbers. Your method would probably consist of starting from the first number to check if it’s a match, and then continuing with the same process until you find the right one. This can take a lot of time. But a quantum computer can speed up the process by analysing multiple entries at once.

Their superiority over classical computers was proved back in 2015, when Google tested a quantum computing system provided by D-Wave Systems. During testing, D-Wave’s machine performed 100 million times faster than a regular computer. The experiment demonstrated that quantum computing tech can outperform a classical computer in solving complex problems. Though D-Wave’s solution costs $15 million, it didn’t stop Google, NASA, and the US government from investing their money in this tech.

But Google isn’t the only player in the quantum computing arena. Companies such as IBM, Intel, and Microsoft are all tapping into the potential of this game-changing technology. At the Consumer Electronics Show held in Las Vegas earlier this year, IBM unveiled its Q System One. This quantum computer is considered to be the first in the world to be suitable for commercial use. Previous quantum computers couldn’t be used outside the lab, but Q System One, as IBM claims, can be used both in a research lab and in a normal environment. IBM’s device is basically a two-metre-tall box made from borosilicate glass and equipped with a cylinder attached to the ceiling.

This 20-qubit system was brought to life by a world-class team of designers and engineers whose mission was to create a solution that will address one of the biggest issues in quantum computing. Though qubits are powerful, they’re very delicate and can lose their quantum properties due to conditions such as vibrations, electromagnetic waves, and temperature fluctuations. To protect the qubits, the team isolated the system, comprised of thousands of components, using a series of aluminum and steel frames. Moreover, IBM’s designers also paid attention to the overall aesthetics of the machine. According to Robert Sutor, IBM’s vice president of Q strategy and ecosystem, “IBM has a long history of design”, and “we are fully coming back to that”. Though Q System One is seen as just an expansion of IBM’s cloud service, the company hopes its technology would be able to one day solve issues that are currently considered too complex. With this innovation, IBM has made a big step forward when it comes to commercialising quantum computing technology.

Microsoft is accelerating quantum computing research in the Netherlands

Microsoft has also made some progress in the field of quantum computing. In 2017, this technology giant announced its collaboration with the Delft University of Technology (TU Delft) in the Netherlands. The partnership between Microsoft and TU Delft’s quantum computing institute, QuTech, is focused on the development of building blocks for quantum computers. The institute was launched as an initiative led by the Netherlands Organisation for Applied Scientific Research and TU Delft. Backed by the Dutch government, QuTech has six other investors, which signed an agreement to support the institution for the next decade with an investment worth €135 million.

Since the development of quantum computers consists of trial and error, it involves a lot of patience, so having financial support throughout the process is crucial. To boost quantum computing research, Microsoft is planning to open its own quantum lab on TU Delft’s campus. The lab, named Station Q Delft, will be led by TU Delft’s professor, Leo Kouwenhoven. Together with his team, Kouwenhoven will be working on topological qubits, which make quantum computers more resistant to outside conditions.

Quantum computing is set to become a multi-billion dollar industry

Tractica further adds that the leading industries for quantum computing adoption are aerospace, automotive, and the oil, gas, and mining sector. Basically, any industry that relies on huge volumes of data is an ideal environment for quantum computers. Financial companies, for instance, could also use these powerful machines to process trade data and “simulate outcomes in seconds”, while in the logistics industry, quantum computing could solve large-scale optimisation problems.

Unfortunately, advances in quantum computing bring security risks. Most of our sensitive information is protected through encryption, and this method is usually seen as effective protection against hackers who rely on classical computers to conduct their attacks, but what about those armed with quantum computers? Quantum computing would enable a hacker to easily break into any existing encryption system and steal our data. Even highly secure blockchain systems would be at risk. Records stored on blockchain are public, but their owners are anonymous and protected with cryptographic keys. Cracking these keys is a complex computing task for traditional computers, but quantum computers would make the process quick and easy. Hackers could break the encryption and get access to whatever is stored on the victim’s blockchain.To prevent this from happening, connected devices, identity management systems, and any other solution that stores confidential data need to be quantum-safe. So, companies and governments don’t have much of a choice than to take heed and devote more time to upgrading their security systems.

“We’re looking at a five-year horizon before quantum computing really takes hold,” says Bob Wisnieff, the CTO of quantum computing at IBM. But just because something isn’t here yet, doesn’t mean we shouldn’t start preparing for it. And to be well-prepared for this encryption-breaking future, IBM’s researchers are working on a new encryption method, called lattice cryptography. The method hides data inside complex geometric structures known as lattices. When data is stored this way, it could make our systems strong enough to withstand an attack conducted by a quantum computer. Another important step for organisations to take is educating themselves more about this technology of the future.

The age of quantum disruption

It’s clear that quantum computing is moving from a nascent trend to a promising technology for many industries. These machines could be used, for instance, to simulate outcomes based on high volumes of financial data or solve big optimisation problems in shipping logistics.

Furthermore, drug research, gene editing, and traffic pattern analysis are some of the additional areas in which quantum computers could make a major impact. Their computing power would also allow meteorologists to rapidly analyse weather forecast data and identify where and when bad weather will strike.

What’s more, scientists could feed quantum machines with decades-long data on climate change and build a more accurate prediction model on how global temperatures will change. This will all be made possible thanks to quantum machines, which will help scientists overcome challenges that the limited processing power of conventional computers imposes on artificial intelligence. More computing power will enable companies to analyse larger amounts of more complex data, providing AI algorithms with the feedback they need to become truly intelligent.

The possibilities are endless, and such benefits will encourage a significant number of companies to set a dedicated budget for quantum computing and ramp up their investments in this tech.

Though the impact of this technology is expected to be significant, what shouldn’t be ignored is that quantum computing is also a huge security risk. The ability to solve highly complex issues in a short amount of time is what makes quantum computers so appealing, but the same could be used as a weapon of destruction. Imagine a computer that can crack into any system within seconds. It’s never too early to begin strengthening our cybersecurity, and organisations should keep an eye on this tech.  We might not know all the details of the future we’re heading for, but as Gary Shapiro, the president and CEO of the Consumer Technology Association, says, “The only certainty about the future is disruption. The pace of technological change is accelerating faster than anything we’ve ever experienced.”

November 24, 2020
The contactless workplace: smart tech solutions take us into the future 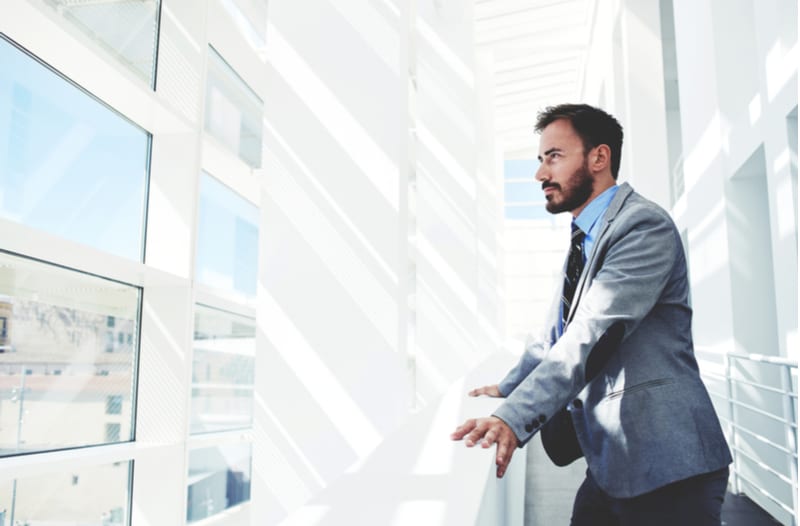