The era of skyscrapers is over: sprawling cities turn to underground expansion

As urban areas struggle to accommodate a growing number of inhabitants, underground spaces are becoming more attractive to some of the world’s biggest cities.
Industries: Real Estate

All over the world, young people are descending into their countries’ urban centres, looking for better education and employment opportunities. Despite the many downsides of urban life, 60 per cent of the world’s population is expected to live in cities by 2050, demanding additional housing and infrastructure for around 2.5 billion people in a world where urban land has become a luxury. But while rural areas are becoming virtually deserted, overcrowded cities are struggling with issues such as air pollution, traffic, and congested public transport. Additionally, cities are heavily contributing to climate change, while at the same time being extremely vulnerable to its effects, such as flooding, storms, and tornados.
A solution that could encompass environmentally friendly living, provide shelter, and ensure enough space for all inhabitants is going underground. More specifically, developing underground cities would, among other benefits, reduce the need for heating and cooling systems, decrease the demand for transportation, and preserve existing historical and cultural buildings. Furthermore, underground spaces would provide proper protection from natural disasters, which are expected to increase in frequency in the future.

Building entire underground cities is by no means a novel concept. The Cappadocia region in present-day Turkey is home to the world’s oldest underground city called Derinkuyu, dating back to 1,800 BC. Built to provide shelter from war and extreme weather, Derinkuyu accommodated 20,000 people and provided shopping areas, places of worship, schools, and houses. In 2010, the Finnish city of Helsinki took a page out of Cappadocia’s book and approved an Underground Master Plan spanning the city’s 214 square kilometres. It was completed in 2019, and it provides winter shelter and a large bunker to serve as protection in the event of a Russian invasion. But security isn’t the only reason for moving below ground – as the Earth’s climate changes, the underground could prove to be one of the safest places to live. The architect Asmo Jaaksi explains that Helsinki is overcrowded and endures dark, cold, and long winters. Moving below ground would offer more space and opportunities to connect with others away from the bad weather.
In South Korea, the city of Busan is also exploring the concept of an underground city, albeit for different purposes than Helsinki. The city is planning to use nearly 35,000 square metres for an underground development with commercial and cultural spaces, as well as meetings, incentives, conferencing, and exhibitions (MICE) capabilities. Busan authorities also wish to build a shopping plaza with natural light and green spaces for citizens to relax and unwind. Construction is expected to take anywhere from 2 to 4 years.

Experts such as Han Admiraal believe that building underground cities is a suitable solution to the different challenges modern cities are facing. Admiraal, a civil engineer, explains that the world is losing significant amounts of arable land every year due to urbanisation, soil degradation, and intensive farming. Underground spaces, in his opinion, could be put to use for growing crops. One of the most significant benefits of placing new farms underneath urban centres is a drastic reduction of food transportation costs and lower carbon emissions. The faster time of delivery also means customers can buy fresh vegetables. Furthermore, crops in indoor, below-ground environments are protected from extreme weather changes, resulting in higher yields. But building underground spaces is a challenge, as their construction can have an impact on the environment, which is why some farms are located in pre-existing subterranean locations.
One such subterranean farm is the London-based Growing Underground. Once a World War Two air-raid shelter, the central London farm produces salad in a controlled environment that’s perfect for growing baby leaves, herbs, and microgreens. As its crops aren’t affected by weather changes, Growing Underground produces plants year-round, without the use of pesticides. Nutrients and water are delivered to the plants via a spigot, and LED lighting is used to create artificial light and warmth. Growing Underground is located 33 metres below the streets of London, which means that the company can efficiently deliver its produce to restaurants, hotels, and shops, reducing transportation emissions in the process. The farm also uses 77 per cent less water than traditional agricultural methods. Despite these benefits, Richard Ballard, one of the founders of Growing Underground, emphasises that not all crops belong underground – some, such as potatoes and other root vegetables, are better suited to traditional farming.

World War Two bunkers aren’t only being repurposed for agricultural purposes. Hong Kong, for example, is home to a commercial wine cellar located in former war bunkers that can store over 100,000 bottles just 20 metres below street level. The basement also houses a trendy club where patrons can enjoy its unusual location and the fact that there’s no mobile phone signal. As a city, Hong Kong is increasingly turning to underground spaces as a location for waste management, data centres, power stations, and sports facilities. With a population of more than 7 million living in an area of 1,100 square kilometres, less than a quarter of its land is available for development. Edward Lo, the chief town planner in Hong Kong, explains that the objective of their policies has always been to develop subterranean spaces, considering the lack of land resources.
Chinese government authorities contracted Arup, an independent design firm, to analyse underground space opportunities in Hong Kong. Their investigation identified 48 potential sites for the construction of subterranean facilities, and another 400 state facilities that could be relocated below ground. Mark Wallace, the director of infrastructure at Arup, says that “The idea was to better integrate facilities, so people can easily move between them, and avoid the conflicts of traffic and weather disruptions above ground. For the city, it results in more efficient use of space, reduces the impacts of urban sprawl, and helps preserve the natural environment.” Most importantly, the stable temperatures below ground require less energy for heating and cooling, which can help cities lower their carbon emissions. Subterranean facilities are also considerably safer in catastrophic events such as earthquakes, typhoons, and thunderstorms, which are set to increase in frequency as climate change takes hold.

Like Hong Kong, many Asian metropolitan areas are facing issues such as overcrowding and traffic congestion as a result of rapid economic development and urbanisation. For example, the Japanese government announced in 2018 it’s planning to offer up to 25,000 euros to Tokyo residents who were willing to move out of the overcrowded capital to the countryside. The high urban density isn’t only reflected in public transportation, but also in hospitals, utilities, and other infrastructure as well. Singapore has mostly managed to avoid these problems, but with expected population growth, its authorities are considering putting its underground space to use.
This city-state is already home to an underground motorway and air conditioning system, but it’s planning to move even more facilities below ground to create more space at street level. The development plan was created by the Urban Redevelopment Authority, which aims to use 3D technology to develop subterranean maps. While there are currently no plans to create underground residential areas, Singapore plans to move critical infrastructure below ground, including utilities, transportation, industrial facilities, and storage.

One of the reasons why urban planners find the underground so appealing is the energy conservation it offers. Dale Russell, a professor of Innovation Design Engineering at the Royal College of Art, explains that during the summer, rocks can absorb the sun’s heat to keep underground cities cool and release all the heat in the winter like enormous radiators. For example, the ground below Paris is always at a constant temperature of 14 degrees Celsius, no matter what the weather outside is like. Gunnar Jenssen, the head of underground psychology at the Scandinavian research organisation SINTEF, highlights that building underground in extremely hot or cold places will make the project cheaper in the long-term. The temperatures are very stable, making the costs of ventilation and heating lower.
Russell imagines that by 2069, the world could see completely self-contained travel and an ecosystem below ground, with specific farming systems in place to grow underground cities’ own food supply. The problem of building subterranean cities lies more in what makes people feel comfortable. Asmo Jaaksi, the chief architect at the underground Amos Rex Museum in Helsinki, claims that his museum found it difficult to convince people to go below ground in the first place. Their solution was to create elaborate skylights that let in natural light and make the visitors feel more at ease.

Will we want to live underground?

The use of underground space to solve specific challenges of urban living began long ago – most metropolitan cities have underground railways, waste management, and even motorways to help reduce traffic. But moving agricultural, commercial, cultural, and state infrastructure below ground, as well as building green spaces with artificial natural light might take some time to get used to. Nevertheless, with some of the world’s biggest cities turning to underground development as a solution to rapid population growth and lack of land, a future where subterranean cities are no longer considered a novelty seems not too far off.

April 2, 2021
How innovation is reshaping the future of the real estate sector

March 17, 2021
Determined to be a post-pandemic winner, the construction sector is finally embracing innovation

May 13, 2020
Innovative tech like AI, robots, and 4D printing bring the construction industry into the 21st century 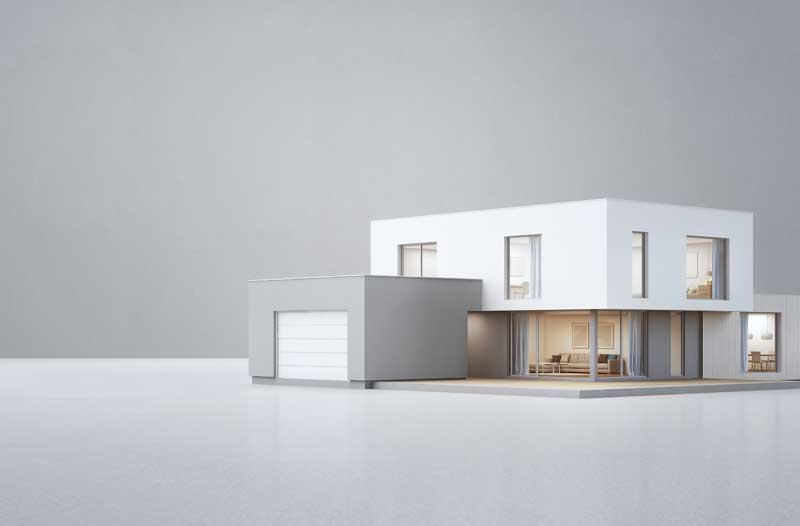 February 14, 2020
AI will help us design, build, and renovate the homes of tomorrow 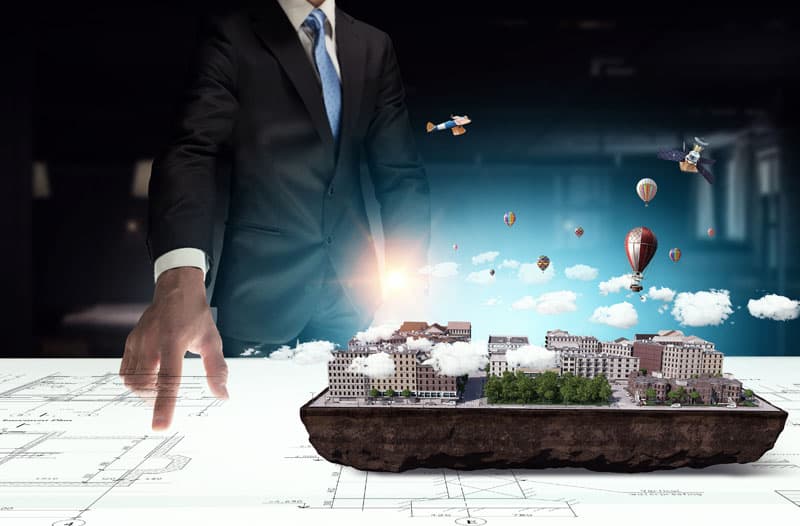 September 2, 2019
No more costly delays – AI is taking over the construction industry